2iycrb2qawutob posted an update in the group THE EVER NEVER HANDBOOK Talk 3 months, 2 weeks ago

Hey guys, I’m going to start a Peterpan Fanfiction, it’ll be after the original tale but not that far in the future. The bio template is below and here is the plot- Peter Pan hasn’t returned to earth in over 2 years. Wendy leaves the window open every night. One night he flies in. He’s worse for wear and asks for her help. Leaving her brothers because she doesn’t want to endanger them she flies to Neverland with Peter and uncovers a new danger. One that cant be stopped. The shadow monsters. consuming all light and making never land ageable. Everyone starts to return to their actual age. Many start to die as they are older than normal human beings, with many lives on the line can Wendy and Peter solve the curse?

Let me know if you want to be tagged, ps I just tagged people I thought would enjoy this but I can untag you if you want me to.
@TEIJA
@CHLOELK
@madnsocal
@JATA
@JESSS4689
@LILYSTARLING
@MOOSEY76

Name: Malvolia (Mal)
Age: Everyone else’s age
Orientation: Straight
Relation to NeverLand(Like a daughter/son of the lost boys or something): Daughter of Tiger Lily
Appearance: Mal has long dark brown hair that she usually wears tied back in a loose ponytail, tan caramel skin, stunning green eyes. She’s tall and muscular.
Personality: Mal is quick to assume and will do anything to protect her friends. She gets in a lot of fights and has learned to let her fists protect her instead of her words.
Formal outfit: https://www.ever-pretty.com/products/round-neck-empire-waist-lace-dresses-for-women-ez07695?variant=29022617043018
Crush: Raymond
Likes: Nature, writing poetry, being alone
Dislikes: The people who treat her like nothing more than a pretty face
Backstory: She grew up with her mother Tiger Lily, but now travels with her friend Raymond hunting down Shadow Monsters
Other:

wait i’m confused is this like a bio competition???? if so here is a little something.
Name: Araysh Hook
Age: 16
Orientation: Demisexual, straight.
Relation to NeverLand(Like a daughter/son of the lost boys or something) : Daughter of captain hook, but is still to find out.
Appearance: ***** blonde hair, big forest green eyes, red lips, olive skin, carved out face, smooth eyebrows and average height.
Personality: Can seem distant and closed off, but is kind and funny when you know her. Can be snarky at times, but overall is fun to be around. Is very opinionated, and fights for her beliefs.
Formal outfit: Long forest green dress, with white frill details. Fitted waist, but a boustier detain on the bust. A poofy (again, emerald green with frilly white details) skirt with a petticoat. Top has a white collar with again poofy sleeves.
Crush: fRaNk
Likes: The ocean, loyal people, writing, books, mythology, lock picking, bow and arrows, silence, nature, etc.
Dislikes: People that are TOO clingy.
Backstory: She was cared for by her father for her first two years, but then was taken to an orphanage when news of his murder attempts spread. She was never released, until the age of 14 when she escaped. She always saw shadow monsters in her dreams, and her dreams started to get less and less colourful and more dark and negative.
Other: idk

also her mother is unknown. forgot about that

can you tag me when you write it?

Name: Ally
Age: what ever everyone else is
Orientation: Bi
Relation to NeverLand(Like a daughter/son of the lost boys or something) : Peter Pan’s biological sister (if that doesn’t work then she is a girl who wants to be part of “Lost Boys,” but is not accepted because she is a girl)
Appearance: Strawberry blond hair with large hazel eyes, pointed ears, slim but strong figure, pail skin,
Personality: She is a feisty one, she is strong (she can probably destroy all of the boys in a wrestling match), she is protective of those she loves, if someone doubts her then she will prove them wrong, she will risk her life for anyone, she is very loving of animals and creatures and is friends with all of them, she scowls and is snarky at times, she will do anything and will risk her life for people she doesn’t know, she does not show her emotions often and does not cry, she is strong willed, and don’t mess with her.
Formal outfit: A small black short dress that she will not admit that she looks amazing in it
Crush: You can choose
Likes: Using the bow and arrow she is god at that, she is also a great sword fighter, protecting people, fighting and wrestling people,
Dislikes: Mean people, she is allergic to snakes so that is her biggest weakness,
Backstory: (If she is Peter Pan’s sister): She is always left out and is always getting the short end of the stick, she feels left out all of the time, she feels as if she needs to prove herself, she needs to be good because of her brother,
(If she is not Peter Pan’s sister): She doesn’t fit in anywhere and feels left out every where she goes, her mother and father were killed and feels that she needs to prove something, she wants to make her dead mother and father proud,
Other:
(you can change anything, I need to go to bed. I would write more if I could!)

Thank you and that’s fine, do you want me to tag you?

tag!! (imma use one of my OCs)
Name: Aubrey
Age: 12
Orientation: pan
Relation to NeverLand: daughter of a lost boy
Appearance: bright red wavy hair to just past her mid back, dyed black at the tips, usually in 2 french braids, vivid green eyes, freakishly pale skin with a ton of freckles, very slender, smaller than average

Personality: She is so nice to absolutely everyone, and makes a lot of friends that way, but she only has one best friend who she tells everything to. She is eager to do everything, to experience the world. She can be shy, and worries about a lot of things. She is really smart, but can be kinda dumb when it comes to other things. She is really sweet, and forgives everyone for everything. She can be really funny, and is most often found with her nose in a book. If you’re her friend she will go to the ends of the earth for you. She takes love and loyalty and friendship really seriously, and if you stab her in the back she will not forget it.She has a beautiful spirit and has a heart of pure gold. She has a huge imagination and can dream up the craziest things. She gets told off for daydreaming a lot; she mainly daydreams about her crush but will daydream about anything. She is kinda scatterbrained and forgets lots of ordinary day to day things. But she makes up for it by being such a nice person, and incredible friend, to everyone even complete strangers. It is impossible to dislike her
Formal outfit: a simple but beautiful dress, either green or white u can choose
Crush: someone sweet and kind but fierce and protective of her. You choose! 🙂
Likes: reading, writing stories, writing poetry, art, being with her friends
Dislikes: she tries to find the beauty in everything
Backstory: you decide
Other:

Will do and thank you!

Name: Maybelle Hook
Age: 13
Orientation: Straight
Relation to NeverLand(Like a daughter/son of the lost boys or something) : Captain Hooks’s daughter but she’s not on his side, she helps Pan solve the curse but in secret.
Appearance: Curly long hair, big eyes, big ears, she wears gloves.
Personality: Curious, optimistic, afraid of her father,
Formal outfit: Lacy dress, off shoulder, transparent sleeves.
Crush: Peter Pan (secret), her father wants her to linked to Jameson(Smee’s son,) but this revolts her.
Likes: Helping, doing good, carrots, sailing, maps
Dislikes: Storms, her fathers feud with Pan, Garlic
Backstory: She’s Hooks daughter, she is expected to follow in Hook’s footsteps. She has to follow what Hook wants.
Other:
When she’s nervous she tends to rub her hands together.
Has a parrot named Jaw, as called by the other pirates, She calls it Joceline.

She has brown eyes, she can’t lie. She usually tells her parrot everything when noone’s watching so that she doesn’t betray herself to others. Joce is the only friend she has, not including all the pirates, cause no one trusts her as she is the daughter of Hook.

Name: Raya Sterling
Age: 12
Species: Mermaid
Aids: Pan and the Lost Boys even though her whole race is against it. She knows that she has to put her faith in him to restore Neverland or they’ll perish.
Apparence: Long silky purple hair, doll like face,
Personality: Determined, open minded, jolly, laughs
Dislikes: The aging curse, Pan, Lostboys( but puts aside dislike for Neverland), Hook
Likes: Her underwater world, her fishes, Tinkerbell

Her mother was one of those mermaids who torment Wendy, during the movie.

(one of my OCs)
Name: Andric
Age: Very old, but has a teenage/child body (like Peter Pan). Looks like he’s 14.
Orientation: Asexual Aromantic
Relation to Neverland (Like a daughter/son of the lost boys or something): He’s a lost boy. Loyal to Peter Pan.
Appearance: He looks quite young and he has a very calculating and cunning face. He has messy dark hair with cold, piercing light blue-green eyes. He has sharp features and has sort of an angular face. He’s very thin and agile and has a very slim build. He has low-ish eyebrows and raises one up all the time. He basically looks like Robbie Kay’s Peter Pan 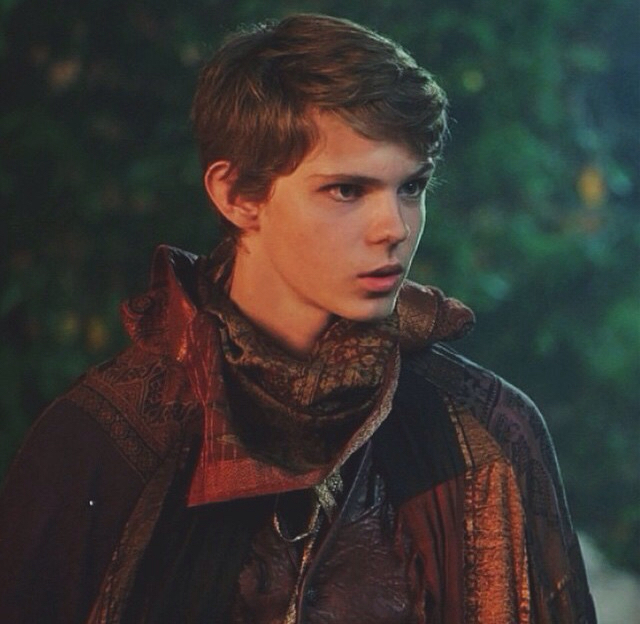 here, because I cannot write a detailed description.
Personality: He’s intelligent, manipulative and cunning with a knack for fooling people. He can be a tad flirty when he wants to distract someone and he succeeds every time (like flirting with Hook’s female workers or something) but he’s asexual, so he doesn’t actually mean it. He’s very loyal to Peter Pan, and whoever Peter Pan’s enemy is, will not be so lucky. He loves playing mind games and you can never tell if he’s trying to fool you or not. He’s charming and sarcastic with excellent wit. He’s often quiet and stays by Peter’s side.
Formal outfit: Well, he’s poor so… not sure. Maybe a black suit. Otherwise, he just wears a tight brown medieval-style jacket with dark-coloured trousers and boots.
Crush: None
Likes: Mind games, climbing trees (he’s very skillful in parkour and swinging on branches), sword-fighting, reading, insulting people.
Dislikes: Water/swimming, sleeping (he just stays awake), when people bring up his parents, small-talk, being bored.
Backstory: His father was a wizard (or something else, doesn’t matter) and he abandoned his son. Andric’s mother died not long after his birth. He was all alone and became a lost boy. The curse doesn’t work on him because of his “magic” lineage.
Other: He is Peter Pan’s best friend and has been his friend for an extremely long period of time.

I cant wait for it!