Hello, all 187 peoples of the SGE student council! We had a really good jump last week in new members- so welcome to all of you 🙂 .
If you want to join, just ask.
It’s the same as last week- there’s a lot of info about the Trial and Circus, so please read those.
How’s your week been? Any news? I haven’t done much, but my last week of school before Christmas break is starting Monday, which is exciting. Three cheers for two weeks off!
SGE question of the week: Do you have a favourite kingdom? Why? I personally love the Flowerground, regardless of the fact that it’s not an actual kingdom. So many amazing things!
Random fact of the week: Pygmy marmosets can leap 15 feet into the air.
Happy birthday, @hesterforever23 and @agathaofwoodsbeyond2019!
(If you’d like your birthday added, just ask)
Trial by Tale info: We’re taking tags! If you’d like to be tagged for this (either to watch or participate), please ask, and include the following information: Ever or Never, participant or watcher, experienced fighter or newbie.
Circus of Talents info: We’re taking tags as well! If you’d like to be tagged for the Circus, either ask or put your name down on the tag list. The link to the doc: https://docs.google.com/document/d/1UTkcXt_RfEzWH1ZBY3s59aU3hpzKwYbh1gUkdgIkqEA/edit?usp=sharing
If you have any questions about anything, ask away. I’m a judge in both, so I have access to everything 🙂
I think that’s all… Have a great day, week, and month beyond!

I don’t really have a favourite, but I think Foxwood has a cute vibe, and Nottingham, while boring, sounds like the type of place I’d enjoy.

Last week of school and FINALS!!! AAAGH! Also, have a concert Tuesday, and finally fave kingdom is honestly probably Gavaldon 😂 it just reminds me of home, and I like it the most because it’s so familiar, honestly.

Hey! Sounds good, I’m not sure if I asked to be tagged for the TbT, but I would just like to watch. Honestly, I have no idea what kingdom I like best. But I do like Bloodbrook and Gavaldon, and I also love the Flowerground. For some reason, it gives me Alice In Wonderland vibes. (or maybe that’s just because I read Heartless by Marissa Meyer today and it’s about the Queen of Hearts, and also in theater class, there’s a script option for Alice In Wonderland.) That’s cool about the pygmy marmosets, did you know that hamsters food pouches can stretch up to double their size? (me just have done lots of research for my hamster Caramel.)
Right now, I just have to finish the creative part for my Humanities essay + creative part, do a bunch of online homework, and maybe write some chapters for my stories!
And I had my school musical auditions on Wednesday and Thursday for Hairspray Jr. and they went great!
So that’s all for this week!
Bai 😉

I’ve tagged you 🙂
I didn’t know that- now I have another cool fact to annoy my friends with XD
Woah, good luck on your homework. (Also, you have Humanities classes too? What subjects does it cover?)

Hey just so you know I didn’t get this notif. Maybe start posting them in Book 6 chat? Idk.
I loveloveLOVE the flowerground as well, it’s always seemed so cool to me! As has Sherwood Forest. I’m very excited for Xmas and NO SCHOOOOOOOL! *cheers* This week has been a good week bc I actually did well in geometry for once! I got a 96 on my test!

Coolio! That’s weird that you didn’t get the notif though, maybe you should start posting them somewhere else Fudge, but heck, I don’t know

Yes, I know. I’m going to start putting these on the doc as well, plus some additional places letting people know about these posts.
Congrats on your score!

For me, it covers literature, writing, history, and important people and societies. Thanks for the tag, and I’m almost done with the math part!

Wow, that’s a lot of things. Good luck on the rest!

Was watching ZLGU play Shield and really wanted to do the raid battles, so I’m taking a break from Persona 5 and playing Shield

Shield team at this point of time:
Seph (name origin explained already) the Raboot, staying with me of course
Castellan (yup he’s named after Luke, thank Pick a Side for that) the Corvisquire, staying with me
Keiichiro (obvious) the Greedent, I regret evolving him. Greedent Keiichiro feels different compared to Skwovet Keiichiro…
Kairi (she’s named after Lupin Red) the Thievul. I love the design but I don’t think I’ll use her
Kaawaabmin the Arrokuda, the fire gym is next so I went “you know what? Let’s try this guy out”
Weneshpii the Hattena

This is my player currently 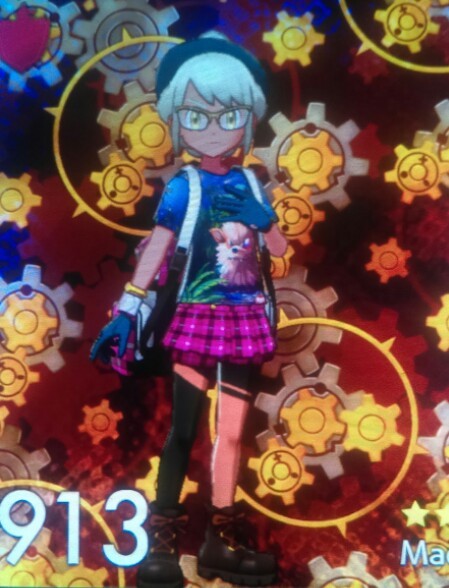 Information on Kiramaeger’s toys may have been leaked.
They’re bloody machines.
Because LvP’s trigger machines did so well. (Hint, they didn’t)

I am shocked. Spirit not playing Persona 5?! Oh, this explains it. I just got a notification that it’s below zero in h.ell.
Impressive amounts of time.
Do you have a favourite character to fight with? Lovely character.
Ladelflop has an excellent name.
*laughs*
Of course they didn’t.

Haha, I like that kingdom where everyone is obsessed with peas. I don’t remember what it’s called, though…kingdom Kyrogios? Kingdom Krigous?

Think it was the first one…

*we appear in the Tri Wizard Championship arena*
*you look around and see a golden egg perched on a rock*
*Harry runs out to grab it*
*a dragon swoops down, a Hungarian Horntail*
*but the dragon is me and I kill Harry with fire*
oop pardon my Harry hating
Hey Foodey!
My week was pretty okay, we’re preparing for the Christmas program at school and my grade is singing Hound Dog! (idk why)
I just went to my friend’s bday party where we were in her hot tub then rolled in the snow (yes we are idiots) and then went to see Six, which was amazing
Neverland def, I’ve just always imagined it being so lively and vivacious
I aspire to be a pygmy marmoset
see ya next week dude!

OMG YOU SAW SIX!!!!! I LOVE THAT MUSICAL SOOOO MUCH!!!
and it’s okay about the Harry hating, I don’t like him either.

*gasps*
Welp, that was dramatic.
That sounds fun! Parties are awesome.
Please do be one. There will be parades in your honor if you become a pygmy marmoset.

OH MY GOD CARROT IT WAS SO GOOOOOOOD I LIKE ALMOST CRIED WHEN THE QUEENS CAME ON ITS JUST
I will do all I can, O Council Leader *bows and returns to the studies of how to turn humans in pygmy marmosets*

Personally my favorite kingdom would have to be four point because i like the name.

I don’t know if I have a favorite kingdom, but my week was okay. One of my best friends who I thought I could trust told I bunch of proven with my crush is even though i told her not to. Today I visited a German Christmas market for German class and it was really fun! My mom and I also visited a cute kitchenware shop and I bought some knee-high sushi socks. I recently got procreate pocket on my phone so I photoshopped an image of Keith and Lance from Voltron as vsco girls because I waste my time on stuff like that.

*people
Also, my friend had her birthday and we all went rock climbing. I got to climb with and without a rope and overall it was very fun! My friends and I also started something called the Uwu cult and we’re going to get custom Uwu cult t shirts

That su.cks.
That does sound fun!
Sushi socks= Happiness
That is something that I can picture you doing 😉

my week was prettttyyy stressful. i’ve been thinking about rereading a sge book, so I might reread 2 or 5. my favorite kingdom is Neverland because it is so diverse and curious! Harry Styles new album has been literally all I’ve listened to for the past week – I can’t get enough! 😂

Ahh good choices.
It is a fun kingdom. 🙂
I think we all have those albums….

yep 😂
also, I was reading the above comments and I have a question: are these only gonna be posted on docs now?

Nope, on docs and on here, to reach the maximum amount of people.